I've always struggled with distance and scale in tabletop RPGs. I'm also...let's say "rusty" on my geometry, especially that of the hexagonal persuasion. Converting between different mapping scales is one of my biggest bugbears, as is the whole process of...you know, taking a real-world place or object and figuring out how to size it on a map, or conversely, looking at a map and picturing in my mind's eye how big or far it should be realistically. I'm exponentially worse at this with hexes than with squares.

Thanks to a very enlightening post at The Hydra's Grotto, I've grown fond of using 6-mile hexes for wilderness travel. Rereading that post the other day, I was struck by the idea of subdividing 6-mile hexes into half-mile ones, and after trying to sketch this out I realized I didn't know how to actually make that work - as in, how to fit the little hexes into the big hexes. After scouring the internet for a map or diagram demonstrating this technique, I resorted to just screwing around with some hex grid paper (courtesy of Imcompetech) until I figured it out. Well, at least I think I did. If there's a better way assemble these dang ol' hexagons can someone please let me in on the secret?

At that point, I took a few more notes, and now I think I've almost got my head wrapped around the problems mentioned above. This is probably "no duh" territory for a lot of people, but I personally found the whole exercise useful enough that I figured I should share my notes in case anyone else has been hexed by hexes like me. It would put a real smile on my face if I helped make the subject less intimidating for even one person. 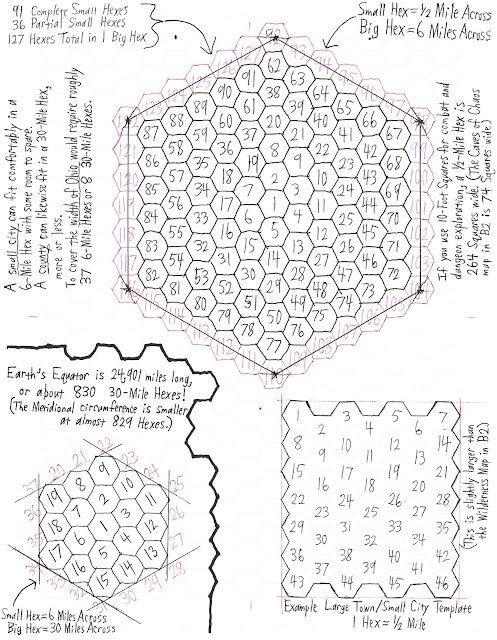 Coming to D&D from a mix of 3rd Edition and various video games, I was slightly perturbed by the sudden influx of hex grids into my life when I started delving into older editions and OSR stuff. I've grown increasingly fond of hex maps over time, but I almost wish I could send posts like this back in time to myself circa 2013 or so and clear up the concepts that confused me the most.


Now I just need someone to explain THAC0 for the millionth time so that'll hopefully sink in.
Posted by Justin Stewart at 5:36 AM 2 comments:

When it comes to RPGs like D&D that feature A) lots of focus on tactical combat and B) big ol' super-enticing fancy-looking bestiaries, I think that metagaming is A-OK. This isn't an original thought, nor is it particularly controversial among the RPG intelligentsia I hang out with, but I guess this is still a controversial opinion for some.


Blah blah "Metagaming creates dissonance between the knowledge and actions of the characters," yadda-yadda whatever. I know you can't "win" D&D in the conventional sense, but some of the main goals of the game are generally considered to be keeping your character alive,* improving their abilities or status, and achieving their personal goals. When a PC dies in a way the player did not want them to die, that's a fail-state, right? Are you going to look me in the eye and say "Justin, I want you to get totally invested in the role of this character. I want you to care about them, and desire to do whatever you can to see that they succeed. Now I want you to fight a bunch of life-or-death battles with one hand tied behind your back," and expect me to feel no qualms, no resistance to at all? What about my dissonance? The goddessdamn nerve!

I don't like to punish players for being good at the game, and one form of "being good" is being knowledgeable. If your players derive genuine fun and joy from the tactical aspect of your game SO MUCH that they're willing to memorize the whole fucking monster manual, just let them enjoy themselves. Sheesh. Besides, those "Monster Manuals" and suchlike are just so cool with their illustrations and (in the best cases) intriguing ecological/mythological details and suggestive bits of lore and other imagination fuel...how can I begrudge anybody for wanting to read them in their own free time?

You know what draws so many people into RPGs in the first place? The monsters! Build on that enthusiasm instead of working against it. Capitalize on your players' craving for more MORE MORE to get them completely invested in the game's setting and the decisions they make.

Here's a fun idea: try giving your players reasonable in-game access to the kind of information they already know about your setting's monsters, so that their characters know the same things they know about the game in reality. "Oh look, it's a shambling mound. Woah, hold on there, my magical friend! Remember that codex we read in the Gardeners' Guild library? It said these freaks don't mind getting hit by lightening. Better adjust our tactics." Voila, no dissonance.

Besides, imagine how annoying it would be if you had to pretend not to know how the knights and bishops move at the beginning of every game of chess. The nice thing about RPGs is that when the "knights and bishops" get stale, you can swap them out for more interesting pieces you haven't used yet. Not only are there probably a bajillion pre-made pieces waiting in the wings, but there's also anything you can personally create. Make some shit up!

Here's my important caveat about metagaming: Homebrew monsters (including novel variations on "official" existing monsters) are also perfectly fine, and their use should be savored and encouraged, as long as such monsters are not solely meant to serve as total screwjobs for the players. By this I mean monsters that cannot be overcome and/or avoided and/or outsmarted at all, or at least in any reasonable way that the players could have discovered.

But other than total screwjobs, if your players are whining about homebrew content just because they can't metagame it, then your players suck and need to git gud. RPGs open a world of limitless imagination, and if the rulebooks hold back joy of creativity and wonder, fuck the books.

Metagaming is like sex: there's nothing inherently wrong with it, you can have lots of fun doing it, and too many people get all hung up over it...but no one owes it to you either, nor do you owe it to anyone else, and most people don't want to literally do it all the time.

TL;DR Metagaming is totally hot and all the sexy nerds are doing it. #metagaming #sex #seo-optimization


*At least until they can die in a satisfying way...which probably doesn't involve the vast majority of possible deaths they face. Hence why death is generally a fail-state in the game.
Posted by Justin Stewart at 3:46 AM No comments:

Now you can contribute to the Nation Bail Fund Network and obtain a veritable treasure trove of incredible RPG content in one fell swoop! Dissident Whispers is a new for-charity adventure compilation by the Whisper Collective.

Posted by Justin Stewart at 5:58 PM No comments:

I have no idea when I'll do it, but I eventually want to run a campaign in the Thieves' World setting, primarily using Chaosium's old box set. I was originally going to use LotFP with some house rules as my system of choice, but I'm honestly not such a big fan of LotFP anymore, as seen HERE and HERE and in the comment section HERE. So that leaves me with the issue of figuring out which game I want to use instead.

It's not exactly a pressing issue, since I won't be running Thieves' World anytime soon. I want to familiarize myself with the source fiction (and not just the RPG material) before I begin, and I have other gaming plans in the near future anyway. I'm also completely spoiled for choice; the box set includes NPC stats for nine different games, and some later publications (like the Thieves' World Companion and an article in Different Worlds #19) add a few more games to the mix. Besides, most of the other setting information in the box set is presented in a system-neutral manner, so I guess you could conceivably use it with almost any system.

Long story short, I made a list of game systems I'm considering for use with Thieves' World. Nothing definitive, just some ideas I had while the topic was on my mind. Here's what I've got so far, in no particular order:
I'd be glad to consider other suggestions, of course.

P.S. If I do end up using some variety of D&D, I'm also tempted to throw in a pretty crazy house rule. Originally, I was going to make all Blue Star Adepts immortal as a class feature. But what if everyone of a certain level or higher (let's say 9th level, the fabled "name level") were to become immortal, PC and NPC alike, regardless of class? My reasoning is that the gods are very active participants in the setting, and that anyone who reaches such a level of skill and importance is bound to be chosen by one or more gods as a servant or avatar of sorts, a pawn in their machinations, whether they know it or not. This wouldn't exactly be a known fact among the mortal populace, except insofar as they know that sometimes important or legendary figures tend to catch the gods' attention, which can have a variety of effects for good or ill. But if you become an experienced enough character, you're going to catch the attention of someone or something that will want to keep you around for a while as part of some ineffable scheme...
Posted by Justin Stewart at 6:19 AM 4 comments: