Just a handful of house rules and items I'm contemplating for Mothership, no biggie.
*Farting optional.
**I love these mundane planet names.
Posted by Justin Stewart at 10:33 AM No comments:

The Ghoul - A Thief Variant for Lost Carcosa and OD&D

As promised, here is my Ghoul class for OD&D and Lost Carcosa. It's basically a mash-up of a Thief and a BX-style race-as-class, meant to replace the playable Ghoul option presented in Lost Carcosa and operate alongside the usual Fighter, Magic-User, and Cleric.

Armor: Leather only, no Shields

Weapons: Any (as Fighter)

XP per Level and Maximum Level: The same as all other classes - see my Lost Carcosa House Rules. 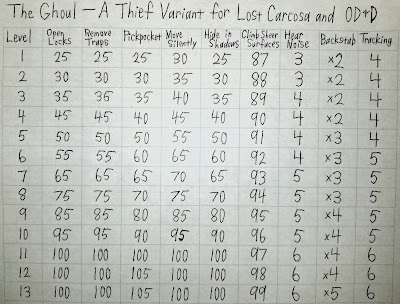 Thief Skills: Ghouls can Open Locks, Remove Traps, Pick Pockets, Move Silently, Hide in Shadows, Climb Sheer Surfaces, and Hear Noises just like the "Thief" class from Supplement I: Greyhawk. However, they use the probabilities of success outlined in the chart above, rather than those in Greyhawk.

Tools: Ghouls can easily craft strong, small tools out of bones, scrap metal, or various other dungeon detritus for use in picking locks and removing traps. They are assumed to begin play with such a set of robust tools, and if these should be lost, Ghouls can assemble a new set within d6 turns (unless unconscious, immobilized, sealed in a completely empty room, etc.). At the DM's discretion, they may also be allowed to craft other types of simple tools in lieu of buying them, given enough time and proper materials.

Backstab/Sneak Attack: Ghouls can attack silently from behind with the same advantages as the "Thief" class from Supplement I: Greyhawk. (See the chart above for the damage multiplier at each level.)

Read Languages and Scrolls: Ghouls can "read most (80%) languages" at Level 3 and cast spells from Magic-User scrolls at Level 10 just like the "Thief" class from Supplement I: Greyhawk.

Tracking: Ghouls can sniff out fresh corpses within a mile on a roll of 4 or less on a d6 at Level 1, with the probability of success increasing with the Ghoul's level as per the "Tracking" skill on the chart above. They can likewise track living creatures that have passed within 60 feet of their position in a dungeon, or a half-mile in the wilderness, at the same probability. When doing so, they receive a penalty of 1 for every full hour that has passed since the trail was laid, so even the highest-level Ghouls cannot follow the six-hour-old trail of a living creature. Ghouls can track undead creatures more easily, with penalties being applied for every day that has passed instead of every hour.

Infravision: Ghouls can see 60 feet in the dark.

Not Picky: Ghouls can safely eat meat and other animal parts that would be considered dangerously spoiled/rotten/inedible by human standards. This generally requires no saving throw. They also make saving throws against ingested poisons with a +4 bonus.

Repulsive to Normies: Human (and Dwarf/Elf/Halfling) NPCs will always refuse to work as hirelings/retainers/henchmen for Ghouls, regardless of their Charisma score. To earn the trust of a horse, mule, dog, or other mundane surface-dwelling animal, a Ghoul must pass a Charisma check by rolling their Charisma score or lower on a d20; failure means the animal will flee the Ghoul whenever possible and otherwise be completely uncooperative.

Ride the Night-Wind: Ghouls do not build strongholds like other classes, being aloof creatures who revel in their seemingly carefree wanderings and live as if in a dream. Some say the most venerable Ghouls organize expeditions to dig magical tunnels to other worlds, but who can say what secrets are kept by the Charnel Lords?

Even without any mechanical changes, I think OD&D Thieves could still work fairly well as a BX-style race-as-class of Ghouls if presented or "flavored" right. D&D Thieves spend an awful lot of time slinking around tombs, after all, like subterranean scavengers and occasional ambush predators.* But come on, it's me we're talking about - I couldn't resist trying to soup things up.

The saving throws and weapon selection follow Holmes Basic. For the Thief skills, I applied the highest possible demihuman bonus from Greyhawk in each category: +10% to Open Locks like a Halfling, +15% to Remove Traps like a Dwarf, etc. The Tracking skill started with a Ghoul's ability to sniff out corpses in Lost Carcosa and ended up being expanded in scope due to inspiration from the Ranger class and the dog-like nature of Lovecraft's ghouls. I didn't bother with alignment restrictions, but it probably wouldn't hurt to ban lawful Ghouls or evil restrict them to only chaos if you really want.

The crafting of tools is mostly for flavor, but I guess it could save some parties a little money or get them out of a few highly-specific jams. Very generous DMs might let players make up for poor pre-delve planning by letting the Ghoul in the party whip up some ten-foot poles or something.

I was tempted to add a note that they can dig through the ground more quickly and for longer than humans, but I decided that would be overcomplicating things. I also pretty much wimped out of detailing any mechanics for creating tunnels to other worlds. I was going to make that the Ghoul's "name-level" project in lieu of the strongholds built by other classes, but 1) I got lazy, and 2) I once again worried about overcomplicating things. Maybe I'll come back and expand on these concepts later. Or maybe I'll save such "advanced" ideas for AD&D. In the meantime, I suppose you could consider the lack of name level follows and "stronghold privileges" a deliberate disadvantage to help balance this class against the others. Or you could call me on my bullcrap and design your own ghoulish endgame.

If this class seems overpowered, I guess you could knock the Thief skills back down to the human norm, or have them roll saving throws like Magic-Users, or restrict their weapons. Their "detection" abilities should probably be reduced a little if you want to use this class without following my accompanying house rules. I have no idea what their XP progression should be in such a case.

If this class still seems underpowered, as many have accused the old-school Thief of being (including yours truly), I'm not sure what else to add without totally stepping on the Fighter's toes. I originally gave this class the Cleric's hit dice, so there's that.

Feedback is more than welcome, as usual. Hopefully I'll be able to test this out myself and report back. In the meantime, happy Spooktober everybody!

*They say a Thief can fit their entire body through any space they can fit their head through; you can't keep these creeps out of anywhere.

Posted by Justin Stewart at 6:40 AM 7 comments:

As mentioned previously, I've been itching to play Lost Carcosa, the new OD&D fan-supplement by Tristan Tanner of The Bogeyman's Cave. Here are my tentative house rules for doing so!

Core Rules = Lost Carcosa, plus the "Little Brown Books," AKA Men & Magic, Monsters & Treasure, and The Underworld & Wilderness Adventures (plus the Reference Sheets)

Rule Clarification: The retroclone Full Metal Plate Mail, The Strategic Review, Chainmail, the "Holmes" Basic Set, Supplement I: Greyhawk, and The Dragon/Dragon/Dragon Magazine will likely be referenced. Others may be added if desired.

All classes follow the Full Metal Plate Mail version of my Unified XP Chart to determine how many experience points are needed to gain each level.

Level 13 = Maximum level for all PCs.

No training is needed to gain a level.

Humans can be either Fighters, Magic-Users, or Clerics. Ghouls are a class unto themselves.

All PCs begin play knowing one additional language of their choice beyond the default.

All spells in the "Little Brown Books" and Lost Carcosa are known by members of their respective classes as soon as they are at a high enough level to cast them. However, spells from other sources (e.g. the Supplements) must be either researched at the normal cost or found and copied from a scroll or spellbook before they can be added to a character's own spellbook, and thus memorized and cast. The DM reserves the right to veto the existence of any spell.

Most magic items are identified immediately. Potions must still be sipped to ID, though.

The new magic items of Lost Carcosa may be used by PCs of all classes.

(Something I'm still chewing over: How do Clerical scrolls work?)

Ability Score rolls = best 3 out of 4d6, arrange to taste.

PCs are knocked unconscious at 0 HP, and die when reduced to their level in negative HP. (E.g. Level 4 = Dead at -4 HP)

Two-handed melee weapons add +1 to damage, except for staves wielded by Magic-Users.

Dungeon doors are not stuck closed by default, but specific ones may be stuck as chosen by the DM.

Fighters (AKA Fighting-Men, as I'm using these terms interchangeably)

Strength Bonus: Fighters get +1 to hit with melee attacks and do +1 melee damage if their Strength is 15 or greater.

Intelligence Bonus: Magic-Users get 1 extra First Level spell per day if their Intelligence is 15 or greater.

No "Read Magic" Spell: Read Magic is removed from the spell list. Scrolls, runes on wands and magic items, and other typical magical writing that normally requires the use of this spell can instead by read automatically by any Magic-User. This skill is considered a basic part of a Magic-User's training. Essentially, every Magic-User is under the permanent effect of a "Read Magic" spell at all times.

Weapons: Magic-Users can attack with staves as well as daggers.

Wisdom Bonus: Clerics get 1 extra First Level spell per day if their Wisdom is 15 or greater.

Level 6 Spells: Clerics gain one Sixth Level Spell per day at Level 12 in addition to their normal spells per day in order to be able to cast the new Sixth Level spell in Lost Carcosa. (If the maximum of Level 13 is ignored, see Supplement I: Greyhawk for higher level spell progression.)

Spellbooks and Research: Clerics use spellbooks like Magic-Users. Clerics can research new Clerical spells just as Magic-Users can research their own spells, and the cost of doing so is calculated the same way.

EDIT: I neglected to mention that many of these house rules are inspired by - or directly taken from - Gary Gygax's house rules for OD&D, specifically the ones originally detailed online in 2005 and 2007. I think you can find the relevant house rules HERE, HERE, and HERE.

Posted by Justin Stewart at 6:39 AM No comments: