I've been "volunteered" by my darling wife to run a D&D campaign for a group of her friends who have never played a tabletop RPG before. This will be my second regular campaign at the moment, the other being the LotFP game I've had going for about a year or two. Speaking of which, the latter will probably conclude soon, making way for other games with that same group. And of course, I always have gaming ideas on the backburner I fantasize about that might or might not actually manifest. So here's a quick list of what I'm playing now and want to play within, say, the next year or two.

Older Group - We're hoping to do these in order:

Newer Group - I haven't decided which of these I want to run.Wish List:

Posted by Justin Stewart at 5:26 AM 4 comments:

This is a follow-up to my post about level or experience limits in OD&D.

I decided that if I ever run Original D&D with just the Little Brown Books (no Supplements), or a retroclone of such with very "faithful" experience-points-needed-per-level charts, then I will probably use a single chart for all classes instead of the default separate tables. I don't like how wildly the XP charts vary between classes by default (as opposed to, say, BX D&D), making it hard to pick equivalent maximum level limits if so desired. Plus, in this variation of D&D I don't think the advantages of giving each class its own chart are great enough to be worth the added complexity. A unified table would probably be faster to reference and to explain to players, and it might make it easier to compare characters, since I don't think it will actually affect "class balance" very drastically at all.

Here's what I came up with:

I created the table pictured above by comparing the XP tables for all three classes in the Little Brown Books (Fighting Man, Cleric, and Magic-User) at each level, and choosing the middle amount of experience needed for any class to reach that level. For example, to gain level 4, a Cleric only needs 6,000 XP, a Fighting Man needs 8,000, and a Magic-User needs 10,000. The Fighting Man amount of 8,000 was neither the highest nor the lowest of the three for that level, so that's what I went with. The only exception to this method, besides the obvious requirement of 0 XP for level 1, was level 7 because the Cleric and Magic-User both need 50,000 XP for that level. I just stuck with that amount to be generous to players. If you would rather have players spend a more even amount of time at both levels 6 and 7, just change the level 7 requirement from 50,000 to 64,000.

If you don't want a max level of 13, and you don't want to keep extrapolating all three classes' original XP tables just to pick the middle amount, here's a quick-and-dirty thing you could try: keep taking the "middle road" in a different way by requiring +240,000 XP per level after that, as per the Fighting Man class. Probably inaccurate, but maybe good enough?

I also made a unified XP table for the retroclone Full Metal Plate Mail, as seen below. It turned out to be exactly the same as the OD&D one until level 12. Honestly, even if I'm running straight-up OD&D instead of a retroclone, I might still end up using this chart instead of the more "accurate" one above. None of us are getting any younger, so I'm not sure there would be any benefit to making players earn 1.5 times as much XP for level 13 when I'd be grateful just to have the campaign last long enough for even 600,000 XP to be within a single player's reach. This table also has the advantage of being easy to extrapolate past level 13 if one does not like my chosen level cap: just add 100,000 more XP per level. 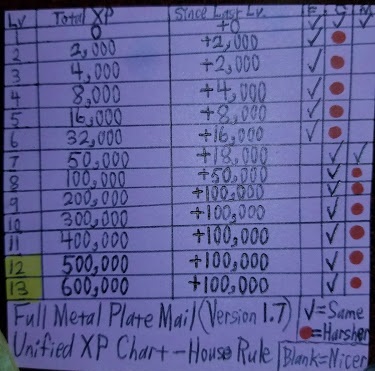 Posted by Justin Stewart at 5:47 AM No comments: