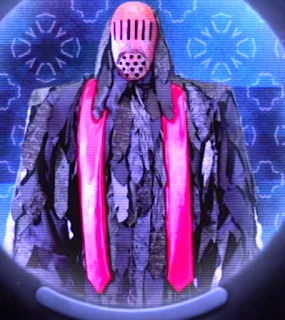 (Image is from HERE. This was the only screenshot I could find on Google.)

I'm a big fan of FilmCow, so recently I watched Detective Heart of America: The Final Freedom. It's great, and you should watch it.

The movie had creepy aliens (or at least alien-like entities), and they inspired me to write up a similar monster for Lamentations of the Flame Princess. But what do I know? I'm just a stupid fucking BABY.

Anti-Freedom Specters from Outer Space
AC 12, Move 120' (Hovering up to 4 feet off the ground, can hover over water, cannot "run"), 1 HD, Morale 12.
One touch attack per combat round (at +0 to hit) for instant death - on a successful hit, the target dies, with no saving throw permitted.
Number Appearing: 1 per every 100 people in the target area who could be considered "residents," "natives," "locals," or "citizens," up to a maximum of 100.

These vaguely humanoid beings are completely covered in cloaks made of black ribbon-like strips of synthetic material punctuated by red, black, and gray plastic tubes, wires, and metal plates. Some of them also sport glass vacuum tubes, large strips or patches of rubber, or small metallic devices of unknown purpose. Their black, laminated hands are long and thin, with fingers that average two feet in length and have up to six knuckles each. They lack legs, and generally move by hovering through the air ponderously. They can climb things like ladders and ropes (at half the speed of humans), but are poor climbers (unable to scale walls or even really steep inclines without generous handholds), and will not climb unless they have absolutely no other obvious way of reaching their prey.

They appear on the horizon and move inexorably toward population centers of at least 100 people in which the legal or social conditions are in imminent danger of becoming more free. Places where voting laws are about to be implemented or expanded, where prohibitions are about to be overturned, or where slavery is about to be outlawed are popular targets for these beings. They go to such places and attempt to kill all humans (or beings of roughly human-level intelligence) within the area. They seem to be able to sense whether or not an individual is a citizen or native of a region - they will chase such people for miles, possibly even to the ends of the earth, but those who are foreigners or visitors to the place being attacked will not be pursued beyond the area's political borders (like the edge of town or a national border). The specters also will not pursue citizens beyond such borders if there are still any other living people in the target zone who are not already being attacked or pursued by another specter. They seem to prioritize killing those in the target area over killing those who have fled. When chasing someone, the specters will follow doggedly until they completely lose track of their prey - their senses seem to be about as keen as those of the average human.

Sometimes, their attacks are preceded by featureless, hollow iron cylinders which fall to earth like shooting stars. These cylinders always land far from the area that the specters attack (just over the horizon, in fact), and when they are observed to fall it is always within 48 hours of the specters' appearance. Strangely, the specters do not always initially approach their target areas from the same direction in which the cylinder lands. The cylinders weigh an average of 100 pounds, and the iron is of a high level of purity; blacksmiths may be willing to buy this metal for use as raw material.

Anti-Freedom Specters attack by touching people with one of their outstretched fingers. This attack works through thin clothing, but not thick coverings (i.e. anything that would count as armor, thus the necessary roll to hit). When a specter touches a victim, every molecule of fluid in the person's body bursts out instantly at high speed, spraying gore in all directions. The effect is like popping a water balloon full of runny paint. The specters attack with no sense of self-preservation, but they do employ some rudimentary tactics like surrounding targets or cutting off escape routes.

When injured but not killed, they seem to be hollow and emit small drafts of ozone. Upon dying, the specters completely turn into human blood. When a group of specters have completed their extermination (aside from anyone who has both left the target area and successfully evaded pursuit), they commit suicide through some unknown means, instantly dying at will.
Posted by Justin Stewart at 3:14 AM