The Saw of Insight - Magic Item for LotFP

The saw looks like an ordinary one-handed woodcutting saw, except that the handle and the back of the blade are decorated with intricate engravings of human and animal skulls and brains. The saw is very hard and sharp, and it can cut through human bone as easily as wood.

The saw's magical properties are activated when it is used to cut open the skull and brain of a living human or other creature of at least human-level sentience and sapience. Doing this requires the victim to be incapacitated, helpless, or pinned down, and takes 1d4 rounds to complete. Once the task is finished, several things occur.

The person who operated the saw gains double the amount of XP that the victim was worth, and the XP is not split among the party - the person who did the sawing keeps it all.

If the target had any spells memorized, the operator of the saw now has those spells memorized, regardless of class. If the operator is of a class that can inscribe spells of the appropriate type into their spellbook, they can do so, although this counts as casting the spells in terms of memorization. Magic-Users can inscribe Cleric spells gained by this method into their spellbooks and vice versa, but doing so inflicts 1 point of damage per spell level of each spell inscribed, and this damage can only be healed by resting and not through magical means. The spells can also be cast, but this of course removes them from memory as usual.

Every time the saw is used to cut open someone's head in this manner, the player must roll a d8 for a random effect from this table:

EDIT: On the Google+ thread about this blog post, Claytonian JP and Johnathan Baker made some excellent suggestions regarding the migraines in the table above. Claytonian JP said that migraines should last for turns instead of rounds, and I think that makes more sense. Johnathan Baker offered some great rules for migraines: "a penalty of -1 or -2 to all rolls >including skill rolls< for 1d4+1d8 turns is not unreasonable, and double the duration if the character is doing strenuous things." 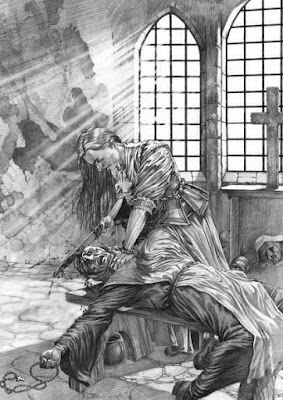 (Image taken from HERE)
Posted by Justin Stewart at 1:48 AM