I've edited this article to add pictures and to replace most instances of "my wife" with "Jessica" or "Jess." Previously, I didn't use her name or pictures of her because I hadn't yet asked if she was okay with such things when I first published this post, but she has since told me she is fine with having an online presence on my blog.

Sorry I haven't posted for so long! I've got a good reason for (part of) my hiatus, though: my wife Jessica and I went to Gen Con! Here are some highlights:

We played The Keep on the Borderlands in a group of about 11 players (not counting the DM) using the B/X rules. It was our first time with the Moldvay rules and with that adventure. The DM had a bunch of really nice copies of the original rulebook printed from Lulu, along with several different homemade equipment lists representing different shops in the Keep, a burlap sack with "Bag of Holding" written on it (which our party eventually won after a hard-fought battle), and some big, high-quality maps. My character (a cleric) took care of much of the healing and held the light source while our group was attacked by 3 slimes from one direction and 3 owlbears from the other - in a cave partially rendered slippery by running water, no less. Thanks to some houserules from the DM, we were a bit harder to kill than normal first-level characters, but we still lost a party member and almost lost a few more. Jessica's plate-wearing fighter survived many blows that might have felled some of the others, and her short bow helped dish out some decent damage - we each started with random histories that gave us certain abilities or items, and she wound up with extra starting money that clearly came in handy. In the end, a dwarf played by a kid who looked to be about 10 or so wound up landing the killing blows on all three owlbears. The damage he rolled was consistently, amazingly high, and he apparently got bonuses against the owlbears because of the weapon he was using. Naturally, I'm looking forward to reading (and hopefully running) B2 when I get the chance.

We also played a game of Lamentations of the Flame Princess. I had to keep ducking out to deal with some bullshit I won't bother going into here, but which was unrelated to Gen Con. Thankfully, Jess said she had a blast the whole time, and I did too while I was in the room. The DM, who was excellent, gave us a choice between Tower of the Stargazer, The God that Crawls, Death Frost Doom, and some one-page dungeons, although he admitted that he wasn't particularly feeling it with the one-page dungeons that day and would have preferred one of the first three options. We all agreed on Stargazer. Long story short, somebody let you-know-who out of the you-know-what, and only 3 of the 5 party members got out alive. I like to think that my magic-user's slime monster (conjured with the Summon spell) and Jess' specialist's time-delayed molotov cocktail (cobbled together with the Tinker skill and some high-proof alcohol) helped delay the enemy long enough for us to make our escape. Our group's fighter went down like a champ after unloading a brace of pistols into the bastard. The dwarf who freed our enemy got disintegrated for his troubles. The cleric was cool, too, but I don't remember what he did off the top of my head. Sorry! On a related note, I wish I could find the particular random starting equipment tables that the DM used to speed up character creation, because they might have been the best I've ever seen for LotFP. The cleric got an acute sense of smell, the fighter got a pet falcon, the specialist got the aforementioned alcohol, and my magic-user got Summon as one of his guaranteed starting spells. It looked like there were many more interesting possibilities, too, and the whole thing was quick and easy to use.

We played some other games that weren't RPGs, and generally enjoyed them. Our group managed to win against Hastur in a game of Elder Sign, which was cool considering that 3 of the 4 players were new to the game, and 2 of those 3 (Jess and I) had never played Arkham Horror, either - I'm told that Elder Sign is essentially just a less-complex, dice-based version of Arkham Horror. I'd be more than glad to get both Elder Sign and Arkham Horror if they weren't so freaking expensive, but that's just the way it is with board games, I guess. Anyway, Elder Sign is fun.

We played Crap or Slap and later wound up buying it, since it was only 4 bucks. It's not that different from Cards Against Humanity, but it's different enough that it kept us interested. How you feel about Crap or Slap will probably depend entirely on how much you like CAH. We played it again with a couple of friends after we came home, and we still enjoyed it. I still have no clue why it's called Crap or Slap, though. Based on the title, I expected it to be some unholy union of Bullshit and Slapjack.

We played two similar games that I believe were from the same company, Ubongo and Dimension. Both were enjoyable, but they did share the same flaw: instead of interacting with each other, they players all work on their own individual puzzles or tasks and ignore each other until the timer runs out, making these less than ideal party games. As fascinating mental challenges, I did like them, though. One is kind of like competitive Tetris, and the other involves stacking balls in an attempt to meet randomly-determined requirements about the composition of said ball stacks. Everyone knows I love a good ball stack.

As for my wish list, I got all the books I wanted and more. Our final haul included England Upturn'd, The Cursed Chateau, the LotFP Rules & Magic book, Carcosa, Vornheim, A Red & Pleasant Land, Maze of the Blue Medusa, an extra copy of Slügs (which I'm probably going to give to someone who doesn't already have it), a Lamentations tee shirt (the one with light blasting out of the Flame Princess' eyes), a Cthulhu Mythos tee shirt from Sigh Co. Graphics, Black Sun Deathcrawl, Warriors of the Red Planet, Mechanized Men of Mars, and a bunch of weird dice for Jessica's collection. I'm sure I'm leaving stuff out. I considered getting one of the LotFP hoodies that said "Because Fuck You, That's Why" but I was running out of cash and I don't think I'd ever get a whole lot of opportunity to wear it.

And of course, I met some famous people I would consider key players in the RPG industry. I love Call of Cthulhu and Quake, while Jess and I both love Doom, so I was embarrassingly awestruck when I met Sandy Petersen near the Chaosium booth. He was wearing a tee shirt with the classic Doom logo on the front and "I wrote it" on the back. He was super cool. I'm looking forward to his next game, which he told me has a very Doom-ish vibe to it.

I met both James Raggi and Aeron Alfrey at the Lamenations booth. Aeron Alfrey signed my Rules & Magic book, which rocks since he made one of my favorite pieces of art in there (and all of the fantastic art in The Monolith from Beyond Space and Time). My conversation with James Raggi went something like this:
RAGGI: (Delivers a general sales pitch, which was a really good sales pitch delivered in a friendly way but which nonetheless kind of confuses me in hindsight because I thought that he made all those flyers so he wouldn't have to do a sales pitch).
JUSTIN: Cool. I'm a huge fan. I've got a shopping list today.
RAGGI: Sure. Which ones do you want?
JUSTIN: Let's see, there's England Upturn'd, and the Cursed Chateau, and the Rules & Magic book, and...
RAGGI: Let me stop you right there. Sorry, I just want to warn you that I can only take cash right now, and I really appreciate you wanting to buy all this but I wanted to give you a fair warning in case you have a card so I don't disappoint you when we're about to finish the transaction.
JUSTIN: Nah, I already knew, but thanks. I specifically brought cash for this.
RAGGI: Oh, cool.
JUSTIN: (Lists more items, shows him a Pembrooktonshire Gardening Society Membership Card.) I don't know if this'll do anything, but I thought I might as well show you just in case.
RAGGI: Yep, that'll do something. (It got me a pretty good discount.)
JUSTIN: How much was that? You got tee shirts? Throw in a tee shirt.
JESSICA: (Having observed, as she put it, James Raggi's eyes getting bigger and bigger with every item I named) Can we get a picture with you two? He really loves what you guys do.
RAGGI AND ALFREY: Sure!
JUSTIN: I can come back when it's less busy...
RAGGI: Are you kidding me? You just gave me a ton of money. If you want a picture, the rest of the crowd can just fuck off for a minute! (To another person browsing the booth) Sorry, no offense.
OTHER PERSON: None taken!

This bystander was kind enough to snap some photos. Instead of "cheese," he had us say "Fuck for Satan!" so whoever he is, he's more than okay in my book. James Raggi did a pretty impressive scream/head bang combo, a touch which I appreciated. I think it's kind of his "thing" when he does pictures with fans. So yeah, James Raggi and Aeron Alfrey are fucking rad.

Later, we went past the LotFP booth again to check out some other booths, and I saw Kiel Chenier from a distance, but I didn't bug him because he was already dealing with a crowd and looked pretty busy. Maybe I should put a Missed Connections ad on Craigslist. That wouldn't be creepy at all. Speaking of Missed Connections, I looked for the Zak/Stoya/Stokely crew, but I couldn't find them during the one chance I had before I needed to get moving for one event or another. I also heard that Zzarchov Kowolski and Jobe Bittman were at the LotFP booth at various points. So to all those I missed: Hi! Thanks for making cool stuff!

Finally, we went to a panel discussion called How to Roll Winning Numbers hosted by none other than industry legend and dice-making extraordinaire Lou Zocchi. I wish I could begin to summarize all of the fascinating and funny history and trivia he shared about those funny little dice RPG players like me take for granted. Being obsessed with dice, Jess took notes. She's expressed interest in writing a guest post for my blog about Lou Zocchi and/or the quirks of dice, so hopefully we can look forward to that. EDIT: Here it is!

We saw many more wonders in the land of the nerds: three good concerts, a hilarious (and informative!) panel on detecting bullshit on the internet, legions of incredible cosplayers, and so much more. I don't know if we can go again next year, but I sure hope so!

As for my friends who let us crash at their place: thank you so much for saving us the cost of a hotel and for showing us around the city and making us feel welcome! 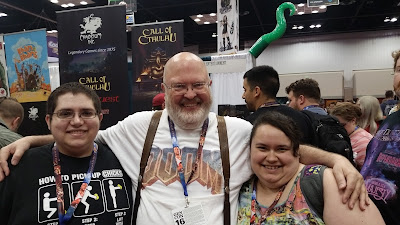 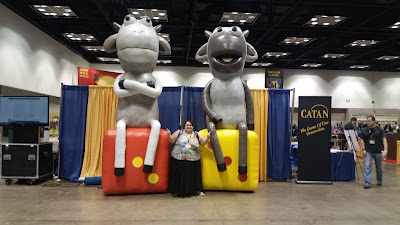 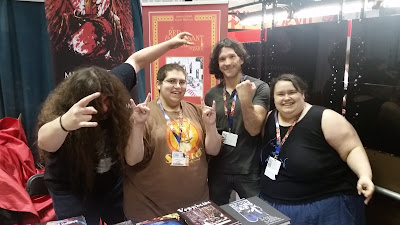 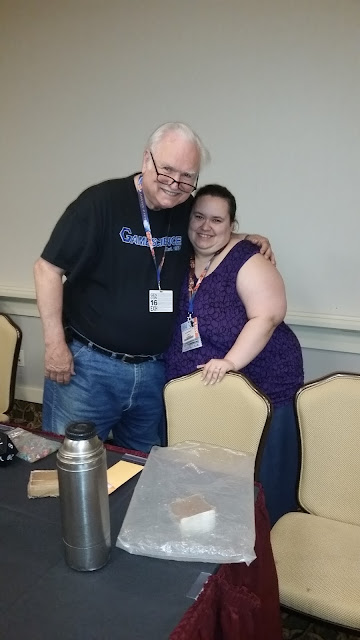 Posted by Justin Stewart at 2:54 AM