PROBABLY NOT SAFE FOR WORK BECAUSE OF HARPY NIPPLES. WHICH IS DUMB.

Let's start my wrap-up by looking at the art I haven't mentioned yet.

This is the TSR logo on my copy of the book. He's like the Platonic ideal of a wizard. He's even got the Fantasia hat with all the cute little stars on it. I wonder how this dude would fare in a knife fight.

Too bad there aren't any stats for lizard men or giant riding lizards in Holmes Basic, because this is a cool image. EDIT: I forgot that there are lizard men in the book. My bad! There are no giant lizards for riding in the book, however. Good thing it's so easy to create new stuff (or borrow it from elsewhere) in the classic versions of D&D. Something about the way the characters are surveying the land gives me a sense that there's this great big fantasy world out there, just waiting to be seen.

How nice of that fighting man to help that Minotaur with his cardio. Much like yours truly, it looks like he could use it. Also, the weapons and armor on display are pretty stylish. I like the Greek mythology vibe going on here. 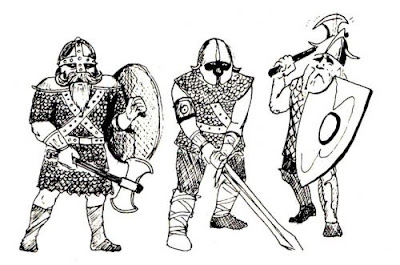 I think these are meant to be Dwarves,. Very Viking/Anglo-Saxon. The silhouetted, cartoony face of the guy in the middle reminds me vaguely of an Adventure Time character, although I'm not sure which one. The variety of equipment is nice. They look like they're holding their weapons awkwardly, though. I think the guy on the left is using his ax to point out some toilet paper stuck to the shoe of a friend out of frame.

I think this is my favorite piece of art in the book.

Nipples? In a game for people as young as 12? It's more likely than you think. (It's only because of annoying prudes that this is even worth pointing out.) Also, these harpies are terrifying. Those poor adventurers are doomed. 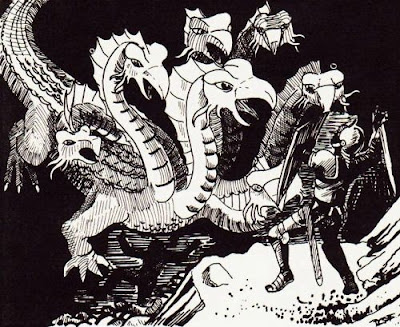 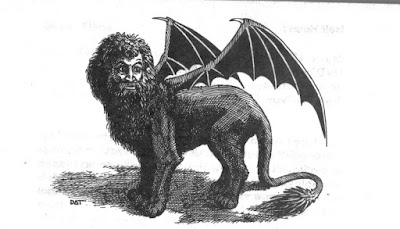 I usually think of a manticore as an enraged, flesh-rending murder-beast, but the look on this one's face is more like that of an inquisitive, slightly perturbed who-farted-beast. The tail looks appropriately pokey, though.

Are those skeletons frowning? I didn't know a skeleton could frown. They must be sad because all the good skeleton music wasn't out yet in the 1970s.

I think I had a toy sword and scabbard that looked more or less like this when I was a kid. They're probably still in a box in my parents' basement, like the toy shotgun they used in Doom.

I never understood the candle-on-a-skull thing. Wouldn't a regular candle work way better? I like how the magic wand looks like the plastic toy wand I had as a kid (like the sword above), except with a little knob on one end. This stuff must belong to an EVIL wizard, since there's a bottle of poison just sitting out in the open.

I'm very fond of the art in Holmes Basic. It sets the mood fantastically, and I kind of wish there was more of it, although I'm not sure where they could have fit any more art in such a slim volume.

Overall, what else was I especially fond of?

In the interest of fairness, here are a few things I didn't care for in Holmes Basic:
Overall, I enjoyed the heck out of this book, and would definitely recommend at least checking it out if you get the chance and you're interested in old-school D&D. I'd give the Holmes Basic D&D Rulebook an underground domed city accessible via giant stone skull out of 10.

After reading through this book, I'm left with a major question: how do I personally want to use it at the table? Here's the idea I'm leaning toward at the moment. The party starts out on the Dungeon Moon from Papers & Pencils (which I've mentioned before) using the Holmes Basic rules. If they make it past the third level of experience and/or escape the Dungeon Moon, we start to transition into OD&D rules. I figure this is a good fit since Holmes Basic seems in many ways like a simplified and clarified version of the rules from the three Little Brown Books and some bits from Supplement I. Also, I've really been wanting to try out an OD&D game, but as I've mentioned before, the original booklets can be a little intimidating for beginners like me. Anyway, if the party makes it to the planet below, the game becomes a West Marches-style wilderness hexcrawl using the board from Avalon Hill's Outdoor Survival. In short, I think I would mash together my OD&D and Holmes Basic ideas from this post, along with the Dungeon Moon concept, adding in more ideas if they seem appropriate, of course.

I guess that wraps up my overview. If you have any thoughts you'd like to share about Holmes Basic or anything related, please feel free to leave a comment. Until next time, keep your wand of petrifaction close at hand, by Crom!
Posted by Justin Stewart at 4:27 AM