Holmes Basic D&D Rulebook Part 11 - He's Got a Wand of Petrifaction, By Crom!

Now we've got a little DM advice, an example of play, and the part of the book that people seem to hold in the highest regard, by my estimation: the beloved sample dungeon. For the time being, you can actually read along with this part at the Wizards of the Coast website.

The section titled DUNGEON MASTERING AS A FINE ART briefly describes the mapping process and suggests that the "geomorphic dungeon levels (available from TSR or your retailer)" could come in handy if you need help generating architectural ideas. Hey, game designers need to eat, too. The book also says that the Basic Set (the box that this book presumable came in, but which I unfortunately don't have) includes In Search of the Unknown, and that this module could be useful not only as something to play but as something to mine for ideas regarding your own dungeons. I've heard that this module and the next one, The Keep on the Borderlands, include additional rules that can be used with Holmes Basic and B/X. Between that and the fact that The Keep on the Borderland is considered a legendary adventure in its own right, I really want to check those out. Hm...I wonder if anyone has ever done a mash-up of The Keep on the Borderlands and The House on the Borderland...

By the way, check out this inspiring image from page 39. 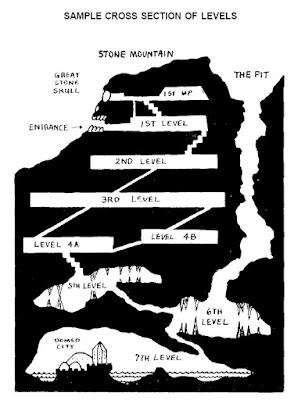 It reminds me fondly of Nupraptor's Retreat, and I wouldn't be surprised if this image was the inspiration for the Blood Omen designers to include such a location. Also, "THE PIT" and the "DOMED CITY" are great touches. I wonder what the scale must be for this dungeon. It must be huge if there's a city down there.

Next there's some typical but very helpful advice on stocking the dungeon. There's a lot of advice in here I emphatically agree with.
The book also suggests that the party designate a mapper, a caller, and someone to keep a "Chronicle" of monsters killed, treasure found, and other important details. In my current campaign, most Chronicle duties are handled by my patient and thorough wife, with some specific things handled by other people. Mapping is pretty much solely handled by one player, as well, and another player sometimes helps me keep track of in-game time during dungeon raids. We don't have a designated caller, though, and my understanding is that almost no one uses a caller anymore. I imagine it would be really helpful if you were running a huge expedition with more than 10 players, but that doesn't seem to happen much nowadays - maybe at some conventions. For small groups, I think it would probably be too formal and cut down on individual role playing opportunities.

Strangely, the book states "Both mapper and caller must be in the front rank of the party." I could see how it would be hard to map or give orders from the back of the group's formation, but I don't see the harm in letting someone in the middle do it, provided the group is sticking together and moving at exploration speed.

Some oddities: Nobody seems to check initiative (or dexterity) at the beginning of combat - the Fighting Man is just like "I got this, bro!" and cuts a motherfucker in half (with 4 damage, because it's an orc). The Elf, Dwarf, and Halfling are referred to only by race and not class, which basically confirms for me that Holmes Basic uses race-as-class in a de facto sense if nothing else. The caller tells someone to light at torch, which is weird because not everyone in the party has infravision and they seemed to be seeing just fine beforehand. At one point, the DM does that classic trick where they know there's nothing going on but they roll a die anyway just to keep the party guessing, which isn't odd so much as just amusing. Near the end of the example, the Dwarf finds a hollow spot in the floor, but the Elf seems to have to go back to that spot to actually try and find a trap door or other secret entrance - I'm guessing this is an example of the Dwarf's ability to find "slanting passages, traps, shifting wall and new construction about one-third of the time" as mentioned on page 6. Still, as far as examples of play in rule books go, this one is great. It gives a clear picture of what exploration is actually like in the game.

The book says that the trip to the dungeon is often included as a part of the adventure as well, with strange or hostile encounters punctuating the journey. Holmes Basic doesn't give any rules for wilderness play, but I guess it wouldn't be too hard for the DM to just run an encounter in a big field if they can't think of anything else.

Here's something that probably gives certain old-school gamers an aneurysm to this day: "The imaginary universe of Dungeons & Dragons obviously lies not too far from the Middle Earth of J.R.R. Tolkien's great Lord of the Rings trilogy." To be fair, Dr. Holmes also name-drops "Fritz Leiber, Robert E. Howard, Gardner F. Fox, classical mythology and any other source of inspiration the Dungeon Master wants to use." Still, I think it's funny that I keep reading things to the effect of "The Lord of the Rings and D&D are almost completely unrelated" and then I come across this passage. I feel like this sentiment comes up a lot on the internet, and while I sympathize (because Tolkien is indeed not the biggest influence on the game, and the game's design doesn't tend to reflect the kind of goals or activities that the heroes generally pursue in LotR so much as in, say, Conan), I still think it's a little silly to try and completely ignore the way Tolkien has influenced the game. It's doubly hilarious because after publishing this book TSR would go on to try and distance the game from Tolkien's work due to legal trouble. I'm sure the debate over exactly how influential Tolkien was on D&D will go on for a long time, and it's pretty interesting to read about. I don't know, maybe I'm making a straw man of some other D&D bloggers here, and if so I'm sorry, but I don't see the harm in poking a little fun at my fellow gamers.

The final paragraph before the sample dungeon contains the most important and liberating advice of all: the rules aren't written in stone. Feel free to change things. Have fun. Use your imagination. Make the game do what you want it to do. Play and experiment. Improvise.

As for the sample dungeon, it looks fun. I think it would be easy to use in most versions of D&D and related games, too. I don't think there's a whole lot that would require conversion. I should give this one a spin the next time I start a new campaign.

Some features of note:

After the sample dungeon, there's a section explaining how to use D&D's funky dice, a cool little bio for Dr. J. Eric Holmes, an ad for Gen Con, two pages of reference tables repeated from throughout the book for quick and easy access...and that's it. Holmes Basic sure packs a lot into 48 pages, doesn't it? I wish more RPG books could be this concise. So many rule books are either boring, intimidating, or just hard to reference quickly during a game, yet this volume showed us how it was done back at the dawn of the hobby.

All that's left is for me to talk a little bit more about the artwork and other things that strike my fancy, then share my final thoughts, opinions, and ideas for the time being.

Next time: Odds & Ends
Posted by Justin Stewart at 5:09 AM