We've Got No Class v2.2
Consider everything to be exactly the same as in Version 2.1 except for the following.

Checkpoint Levels
Player characters gain levels. Players likewise gain "checkpoint levels." A player's checkpoint level in a given campaign is determined by the highest level that any of their PCs have ever reached in that campaign, in accordance with the chart below. At the beginning of the campaign (or the first adoption of these house rules in the campaign), the referee should choose either "Easy Mode" or "Hard Mode" for the purposes of determining what checkpoint levels correspond to what character levels. 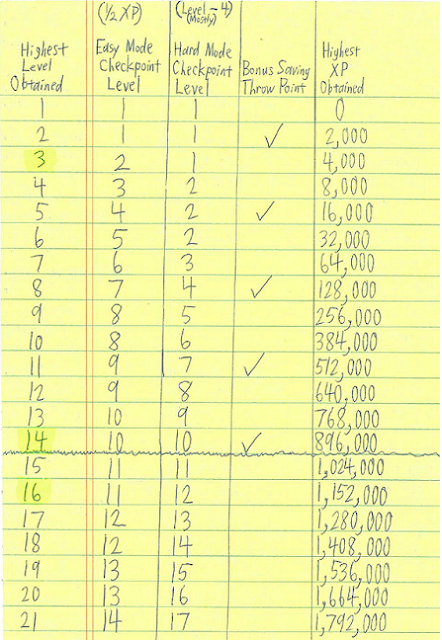 If a PC dies, the player of that PC may create a new character within the campaign at any level less than or equal to the player's current checkpoint level. For example, in an Easy Mode campaign, the first time a player succeeds in raising their PC to level 4, their checkpoint level becomes 3; therefore, if the PC dies after that point, the player can make a new character that begins at level 3 (or less, if they so desire).

A PC can lose levels due to magical "energy drain" or other such in-game effects, but a player's checkpoint level never decreases within a given campaign. For example, let's say Susie is playing in a Hard Mode campaign, and the highest level that any of her characters have ever reached is level 9, meaning her checkpoint level is 5. Her current PC happens to be level 9, until she loses 7 levels to the chilling touch of an evil specter, becoming level 2. Susie's checkpoint level remains at 5, even though her current PC is at a lower character level. If her PC dies, she can still make a new character at level 5. If Susie wants to increase her checkpoint level beyond 5, she will still of course need to play at least one PC who survives to level 10 or higher.

(Yes, this means that a player could have their level-drained PC rush recklessly into danger specifically to get killed so they can make a new character at a higher level. I personally think that would almost always be incredibly lame, and I probably won't feel bad if the player gets mocked for this, but it is technically allowed.)

By default, each player can only control one PC at a time.* This does not include retainers, henchmen, etc., as they are technically NPCs controlled by the referee (and are simply "ordered around" by a PC unless the referee explicitly allows otherwise), they are created by the referee rather than a player, and they are not subject to the benefits of a player's checkpoint level.

Characters can only advance up to level 14 in the "We've Got No Class" system of house rules, but I extended the chart to level 21 just in case someone wants to use checkpoint levels outside of this context. Note that "Hard Mode" is actually easier on the players from level 16 on.

*If a referee wishes to allow multiple PCs per player, they could simply determine a player's checkpoint level based on the highest level that any of their PCs have ever reached in the campaign, as usual. This could be prone to exploitation, as a player with one PC at a significantly higher level than all of their other PCs could purposefully kill off their lower-level PCs for instant higher-level replacements, and that would be pretty lame. To prevent this, stricter rules may be desired. For example, the referee could allow each player a certain number of "slots" to be filled with living, active PCs, and require each player to track a separate checkpoint level for each slot.
Posted by Justin Stewart at 4:40 AM