Odds & Ends 2: Holmes for the Holidays

Holmes Basic D&D has been on my mind once again lately. Jess and I both miss playing D&D in person - as opposed to the online roleplaying we've been doing during the pandemic - so I pitched the idea of some one-on-one dungeon crawling with the good ol' Blue Book to her. She likes the idea, naturally. It's not hard to talk her into rolling dice.

So now I've got more odds and ends on the brain lately, all revolving around Holmes Basic this time. I don't know why, but Holmes seems to be linked with December and Christmas and winter in my mind. It's not like the Blue Book has any particularly wintry illustrations or rules or anything. It's just a weird feeling I have. Hey, maybe this is the start of a new holiday/winter tradition.

By the way, if you're also a fan of this particular version of D&D, check out this cool thing made by Zach Howard of Zenopus Archives! 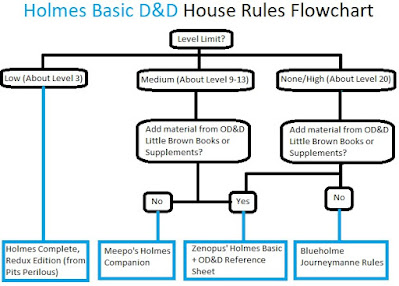 A lot of people have expanded on Holmes Basic in different ways. These are my favorite fan-made expansions at the moment. Different DMs are going to care about supporting or modifying different aspects of the rules - here's my criteria for choosing one set of house rules over another, depending on what I want to get out of my Holmes campaign or one-shot.

Holmes Complete, Redux Edition was recently posted at the excellent blog Pits Perilous. I think this might have been what got me pondering Holmes again, actually. Simple, elegant, great for anyone who wants to focus specifically on low-level play but bring in just a few more features to make the game feel more complete. I'll return to this one below.

Meepo's Holmes Companion is a classic I've seen posted many places on the internet. This page at the Zenopus Archives seems to be one of the most reliable places to download it. This is perfect for the Holmes DM who wants more than just three levels of growth for PCs, but still wants to keep things fairly limited in scope overall. Also short and sweet at four well-organized pages.

The Holmes Basic + OD&D Reference Sheet can be found at this page. It's ideal for starting with just Holmes and incorporating more OD&D material over time. It's a cool piece of work that's inspired me before. Very short at one page, with excellent layout, but also requires the most books for reference (Holmes, Little Brown Books, and probably Greyhawk at the very least).

Blueholme Journeymanne Rules is a complete game in and of itself, essentially a retroclone of Holmes but with a huge expansion of new material, including a bunch of playable races and advancement to at least level 20. This is the most self-contained and thorough option. I backed this on Kickstarter, but I honestly haven't dug into it too deeply yet. It seems really good, though, and you don't need to track down any old D&D books from the '70s to play it.

I should start my noting that I used both Holmes Basic and Meepo's Holmes Companion to make this table. Without Meepo's expansion, I think the first five XP "milestones" should still be in line with the Holmes rulebook as written, however.

Prior to AD&D and B/X, the rules for elven PCs and their weird multiclassing are pretty vague and open to a lot of interpretation - debate on how OD&D and Holmes Basic elves are supposed to actually work rages on to this day. Well, I can't speak for the Little Brown Books' elf, but I'm reasonably sure this is, if not the one true intended way for the Blue Book's elf to advance in levels, then at least a reasonable interpretation of the rules, and thus "close enough" to what was intended.

The "Level" column on the far left is just my own simplification, equal to the number of hit dice the elf possesses at each experience point milestone. The "Class" column is the actual breakdown of how many fighting man and magic-user levels the elf has at each milestone. The first five hit dice (or my simplified "Levels") are covered by the actual Holmes Basic rules, while everything from 6 HD and up is my interpretation of how I think Meepo's rules are meant to expand elven advancement beyond that.

Three noteworthy things: First, elves each start with 2 levels - one in each of their two classes - but only get one hit die between the two of them...yet each additional level in either class grants a hit die, so their total HD always equals the sum of their two class levels minus one. At first I thought that couldn't be right, that maybe they only gain HP every fighting man level or every even-numbered level or something, but no, as far as I can tell the rulebook never specifies anything like that and seems to imply they gain d6 HP every time they gain a level, period.

Second, an Elf doesn't really benefit from their second and third fighting man levels except through additional HP (and I guess additional buffers against being killed outright by level drain). If my interpretation is wrong, then one alternative would be to give the elf a hit die every magic-user level, since that would be "every other level" for at least the portion of character advancement handled by Holmes, and those would be the points at which the elf has an equal level in both classes...but if you do that, you could practically just forget about the elf's fighting man levels altogether and make this whole thing much simpler, right? Instead of the confusing explanation in the book, couldn't Holmes (or Gygax and Arneson before him) have just said "Elves are magic-users that can wield the same weapons and armor as fighting men, save as fighting men when advantageous, and have d6 HD, but require twice the XP to gain each level" and called it a day? No division of XP between two classes, no confusion over HD, nice and easy.

But assuming I'm right that they get d6 HP every time they level up in either class, this means if you play Holmes Basic by itself with no house rules/expansions and without transferring the campaign to another set of rules like AD&D to allow PCs high than level 3, then elven PCs "max out" at a de facto higher "Level" than their human and other demihuman counterparts! Everyone else gets 3 levels and 3 HD, while the elves get 3 levels across two classes and a whopping 5d6 HP between that total of 6 levels.

Did I get this wrong? Please feel free to point out anything I missed or may have misinterpreted in the comments. Feel free to offer your competing interpretations as well. Who doesn't love a good nerd debate?

I plan to use the following house rules when Jess and I play our one-on-one game. They're mostly a mix of Holmes Complete, Redux Edition and bits of my own tinkering (like this and this), with a few things borrowed from Meepo's Holmes Companion and Gary Gygax's OD&D house rules. First, I've taken the altered level-based progression of spells and other class-based abilities from Pits Perilous and extended them to a maximum limit of level 4 (or 2/2 for elves), as per the chart below: 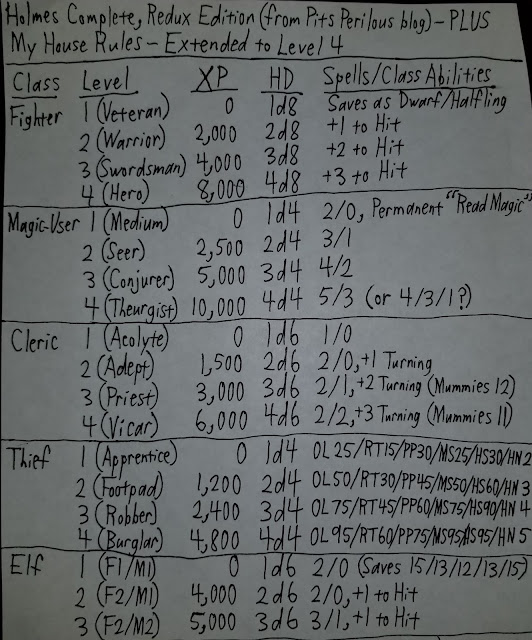 Note the two different spell totals for level 4 magic-users. Which one I pick depends on whether or not I end up including third-level spells. If I do, I'll probably pull them from Meepo and/or Zenopus.

Second, I'll be borrowing from Pits Perilous the "renown" system and the rules for losing a level instead of dying at 0 HP. Also, I'll be using everything listed on the first page of Meepo's Holmes Companion under "Rule Variants" except for dual wielding and critical hits. (Crossbows will still take a round or two to reload, in case you interpret the "COMBAT ROUNDS" section to indicate otherwise.) I will also allow fighters "with STR of 13 or higher [to] add 1 to their damage in melee combat" as per page 2.

Finally, the following changes will apply:

Warning: Some links below may be Not Safe For Work due to mild nudity.

When I did my read-through of Holmes Basic in 2016, I talked a bit about the art in the US copy I own, but I neglected to mention that the UK release had a lot of different art. It's really good, too! I especially love the cyclopes.

The blog Scrum in Miniature has a wonderful post showing off the UK art HERE. I really just wanted an excuse to point everyone towards that highly informative post, but you can find some of the differing art in a thread at Dragonsfoot as well.

Over at one of my absolute favorite blogs Papers and Pencils, Nick has lots of cool info on his Dungeon Moon setting, which I've discussed before. I would still love to play a Holmes Basic campaign set on the Dungeon Moon. I would probably either use the Holmes Basic + OD&D Reference Sheet or the Blueholme Journeymanne Rules. Mirroring the "dungeons at lower levels, wilderness at higher levels" philosophy typical of many old-school campaigns, I'd like to start out focused on dungeon-crawling on the moon, and then open the game up into wilderness exploration if/when the players find the portal down to the planet below. Of course, the planet might not be as serene and lovely as the moon's inhabitants hope it will be...

EDIT: Whoops, looks like I already talked about this years ago. Well, I still think it's a good idea, so whatever.

Posted by Justin Stewart at 2:58 AM